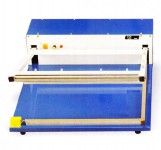 With the L-sealer, you need a preparation unit e.g. YC4545WR.An L-sealer is intended for use with centre-folded plastic film. Typically, the roll of centre-folded film is placed on a preparation unit (separate item, separately priced). If the film is to be pulled tight, after sealing, by heat-shrinking, then the preparation unit will be adjusted to perforate the film, so air can escape when the enveloping film shrinks.
The end of the roll of film has been sealed by the previous operation, which makes two sides sealed. The goods are inserted between the two layers of film (which are conveniently held open by the preparation unit) and then the arm of the L-sealer is pulled down to seal off the remaining two sides.
The L-sealer melts through the plastic, so the excess plastic does not become part of the envelope.
Before ordering an L-sealer, measure the dimensions of the largest pack which you intend to enclose in film.
This 450mm x 450mm flat-type L-sealer can cope with the pack if the height is no more than 100mm, and the sum of height and width is no more than 450mm, and the sum of height and length is no more than 450mm.
With the L-sealer, order one small roll of Nitto insulation, and a pack of two spare elements. These items are consumables. 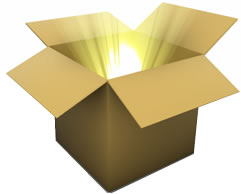